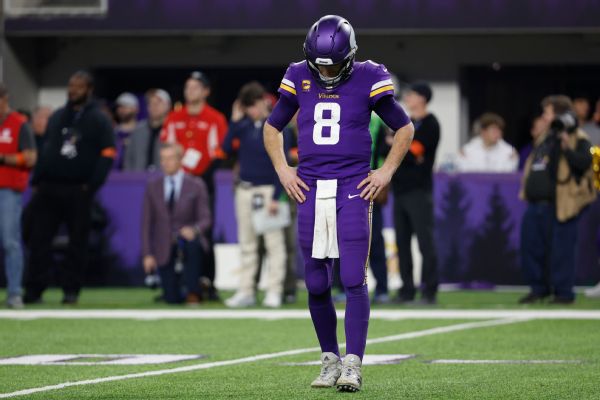 MINNEAPOLIS — This season seemed different for Minnesota Vikings quarterback Kirk Cousins. His team won 13 regular-season games, by far the most in his career. In Kevin O’Connell, he linked up with a coach who trusted him to throw more passes than he had ever thrown, with fewer schematic guardrails than he had ever faced.

In the end, however, Cousins found himself in a familiar position Sunday at U.S. Bank Stadium: heading home for the offseason without a playoff win. The Vikings’ 31-24 loss to the New York Giants was his third defeat in four career postseason games, and it’s one that he said delivered a new level of pain.

“It hurts,” Cousins said. “It hurts. I’m probably missing one, but this is probably the toughest loss I’ve had in my career.”

Asked why, he initially said: “All the obvious reasons.”

Later, Cousins elaborated a bit, noting the Vikings’ regular-season success and the possibility that some pending free agents — including center Garrett Bradbury and tailback Alexander Mattison — might depart in the offseason.

“Thirteen wins, I haven’t really sniffed that before,” Cousins said. “And just the fact that the group, the Garretts and the Alexes that … are free agents that are not guaranteed to be back, I think it’s hard to walk off the field.”

In some ways, Cousins put together his best game of the season Sunday. He completed 31 of 39 passes for 273 yards and two touchdowns, while running for a third, and compiled his best Total QBR of the season (85.2).

Overall, he had an odd year in his first season with O’Connell. On the one hand, he threw a career-high 14 interceptions and finished with a career-low QBR of 49.8. On the other, he led eight fourth-quarter comebacks among the Vikings’ NFL-record 11 one-score wins, and he had a chance at another Sunday against the Giants.

But the game essentially ended when Cousins threw short of the sticks to tight end T.J. Hockenson on fourth-and-8 near midfield. Giants safety Xavier McKinney tackled Hockenson after a 3-yard gain with 1:44 remaining.

Asked about the decision to throw to Hockenson rather than receiver Justin Jefferson or another vertical threat, Cousins said: “Just a shell read there. Saw single high. Tried to work Justin. Didn’t feel good about putting it up to Justin. And then when I went to progress, I just felt like I was about to get sacked, and I felt like I’ve got to put the ball in play. I can’t go down with a sack, so I thought I would kick it out to T.J.

“I had thrown short of the sticks on a few different occasions in the game, and even going back a few weeks, and just felt like throwing short of the sticks isn’t the end of the world. It was obviously tight coverage so he didn’t have a chance to pull away. I thought I was going to go down and take a sack if I didn’t put it up.”

O’Connell acknowledged that he approached Cousins afterward to understand why he made that throw, and the coach said: “I could have done a better job in the moment.”

O’Connell said he would have preferred a downfield throw but didn’t want to load up Cousins with directives before the snap.

“The intent as a playcaller is you’re not going to call a primary concept where somebody’s short of the sticks, especially if it’s fourth down,” O’Connell said. “Looking back on it, maybe I could have been a little bit more, ‘Hey, this is where you want the ball to go.’ But I want Kirk to be able to play and be free out there to make good decisions. He did all night long.

“In the end, I look at it as it’s as much on me with that playcall, even though we had [eligible receivers] with a chance [to get] down the field maybe. There’s always a play that could be better.”