Tom Brady says no timetable for decision after Bucs eliminated 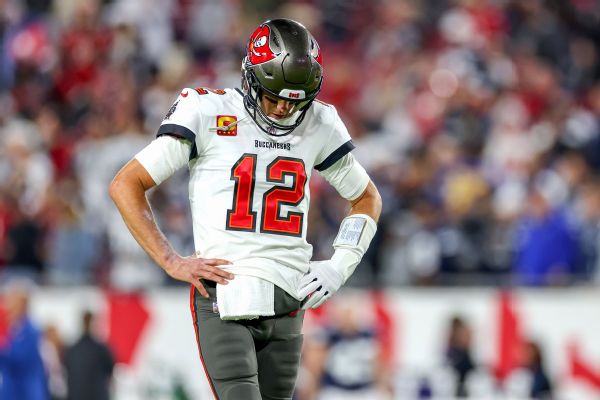 TAMPA, Fla. — Keeping true to his word, that he wouldn’t be “taking time to smell the roses” in what might have been his final game with the Tampa Bay Buccaneers and possibly in the NFL, quarterback Tom Brady was among the first to reach the tunnel at Raymond James Stadium after the Bucs fell 31-14 to the Dallas Cowboys on Monday night in the wild-card round of the playoffs.

It was just the third time in his 23-year career that he lost in the opening round of the playoffs. With his gaze downward, he wiped the sweat from his forehead and through his tousled hair. He then shared an embrace with safety Logan Ryan, who spent four seasons with him with the New England Patriots, as the two made their way to the locker room.

“Not the way we wanted to end it, but we didn’t deserve it,” said Brady, who, like he did through much of the season, struggled to get anything going offensively without ample protection or a ground game. “I give them a lot of credit. They played a good game. Made a lot more plays than we did, so a tough night.

“I think there’s a part of football where I feel like it’s — sometimes you get lucky, but most of the time, the team that earns it wins, and they played [well] all year.”

With his contract set to expire and a “no tag” clause, Brady cannot be franchise tagged and will become an unrestricted free agent at age 45 unless the Bucs are able to re-sign him. He will be free to sign with any team, if he chooses to continue playing.

“I’m gonna go home and get a good night’s sleep — as good as I can tonight,” Brady said, adding that he has no timetable for making a decision. “This has been all I’ve focused on — this game. It’ll just be one day at a time. Truly.”

A year ago, Brady decided to call it a career. But 40 days later, he changed course, saying in a post on social media, “These past two months I’ve realized my place is still on the field and not in the stands. That time will come. But it’s not now.”

Brady was asked whether he felt anything different walking off the field Monday night than he did at the end of last season.

“It just feels like the end of the season,” he said, before he began thanking the people in the room and the reality appeared to set in that this might have been it for his time in Tampa after three seasons.

“I just want to say thank you guys for everything you did this year. I really appreciate all your effort. I know it’s hard for you guys. I know it’s hard for us players to make it through. You guys got a tough job, and I appreciate all you guys do to cover us, and everyone who watches and is a big fan of the sport — we’re very grateful for everyone’s support. I love this organization. It’s a great place to be,” he said.

He then began to get choked up.

“Thank you everybody for welcoming me, all the regulars,” Brady said. “And I’m just very grateful for the respect and I hope I gave the same thing back to you guys, so thank you very much.”

“It’s definitely a surreal feeling, to watch somebody as a kid, and then obviously getting the chance to be in the locker room and talking with him, competing against him [in practice] — you see why he is the guy he is, why he’s so great at playing quarterback,” said inside linebacker Lavonte David, who is also set to become an unrestricted free agent.

“I’m definitely appreciative of him,” David said. “I told him, ‘No matter what, you’re the GOAT in my eyes.'”

Prior to Brady’s arrival, David had spent eight seasons in the NFL before finally getting a taste of the playoffs, with Brady leading the Bucs to a Super Bowl his first season in Tampa in 2020. Then in 2021, the Bucs were eliminated in the divisional round in a last-second 30-27 loss.

“[He’s] a guy I looked up to my whole life and just the opportunity to learn under him — not just football, but kind of just the way he handles himself with so many different things. He always handles himself — well, most of the time — with grace and humility,” tight end Cameron Brate said with a laugh. He had gone six seasons without a playoff appearance prior to Brady.

“It’s awesome that I got to do that. … It’s been amazing playing with Tom. Who knows what will happen with him. I know he’ll probably take some more time this year to figure out what he’s doing like last year. But yeah, it’s been awesome.”

Rookie running back Rachaad White was equally grateful and called Brady an “awesome human being.”

“Just being able to meet him, playing alongside and just pick his brain as a human being outside of sports and things like that was great,” White said. “Obviously it would be awesome if he played another year of course. But it’s up to him, you know? I mean, I just turned 24. It would be his [24th] season. He’s been in the league since I was born.”

Cristiano Ronaldo to make Saudi debut in friendly against PSG