GM expects Kirk Cousins to be Vikings’ quarterback in 2023 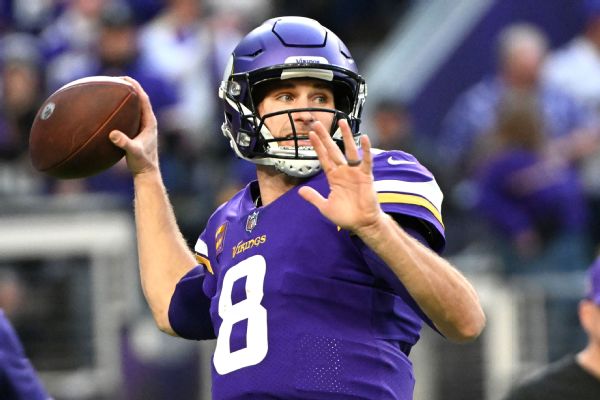 EAGAN, Minn. — When the Minnesota Vikings signed Kirk Cousins to a contract extension last spring, the unspoken expectation was that he would remain the team’s quarterback through at least the 2023 season. General manager Kwesi Adofo-Mensah confirmed that timetable Wednesday.

Left uncertain, however, is whether Cousins — who will turn 35 in August — will receive another short-term extension or whether he would play next season in the final year of his deal.

“It’s our expectation that he’ll be our quarterback,” Adofo-Mensah said during a news conference to discuss the Vikings’ 2022 season, which ended Sunday in a 31-24 wild-card playoff loss to the New York Giants. “I can’t say exactly how that would look. We have everything at our disposal. We’ll consider all those things just like we would with everyone else on the roster.”

Cousins is set to earn $30 million in cash and count $36.25 million against the team’s salary cap in 2023. An extension would make it more difficult to move on from him as he moves into his late 30s, but it likely would lower his 2023 cap hit.

That could prove beneficial for the Vikings as they enter contract negotiations with All-Pro receiver Justin Jefferson, who became eligible for an extension this month. He is signed through the 2023 season, and the Vikings almost certainly will pick up his fifth-year option for 2024 this spring if they don’t strike a deal before then, but his price will only go up over time.

Adofo-Mensah said the Vikings have had “initial dialogue” with Jefferson’s agent, but a source told ESPN’s Adam Schefter that formal negotiations have yet to begin.

“You’ve got a special player [and] and special person,” Adofo-Mensah said. “Those aren’t problems. Or at least, those are ‘champagne’ problems. … We get back to that in the planning but again it really starts from the player, the person and we’ll work on solutions from there on.”

Jefferson on Monday told reporters that a potential contract extension is “not really something that I’m really worried about or I have my mind set on. … I will be wherever I’m wanted. If they want me here, I’m here. That’s not something that I can really control.”