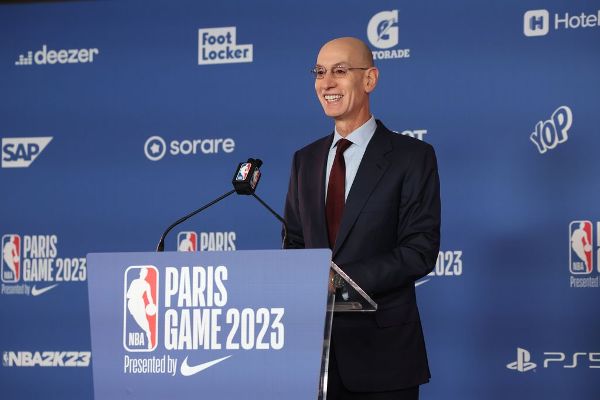 PARIS — NBA Commissioner Adam Silver had a meeting this week in Paris and was asked by a gracious host how he takes his coffee.

Over that coffee, the leader of the NBA and the leader of France struck a deal to work together with hopes of continuing to grow the game of basketball internationally — a marriage of perfect timing, given how French star Victor Wembanyama is a few months from coming to the NBA and the Paris Olympics are about 18 months away.

The NBA announced some details Thursday, including a collaboration between the league and the LNB, which is France’s top pro league; events that France and the NBA will work on together as part of the buildup toward Paris 2024; expanded youth programs; and additional work toward growing the game in Africa, with both the league and France committing to further investments there including facilities capable of playing host to Basketball Africa League games.

“His belief, I think, is very similar certainly to the NBA’s about the power of sport to bring people together and what a constructive force it can be and even as a global engine to create commonality and empathy among people,” Silver said.

Macron, Silver said, happened to have his schedule align with a BAL game during a visit to Rwanda in the league’s inaugural playoffs. Macron watched the game with Rwandan President Paul Kagame.

“He’s very familiar with all our global plans, in Africa particularly,” Silver said.

Macron had other pressing matters on his schedule this week. At least 1.1 million people protested on the streets of Paris and other French cities Thursday amid nationwide strikes against plans to raise the retirement age, but Macron — who met with Silver on Wednesday in Paris, and was at a French-Spanish summit in Barcelona on Thursday — has said he will press ahead with the proposed pension reforms.

Basketball was likely only a brief distraction.

“I am delighted and proud of the NBA’s choice to make France and Paris one of its privileged playgrounds in the world,” Macron said. “It reflects the special and long-standing relationship that France has with the NBA. With the excellence of our training, the performance of our national teams and the hosting of the Paris 2024 Olympic and Paralympic games, we now have the opportunity to go further and engage in a useful and lasting partnership for the benefit of French basketball, as well as in support of our development policy in Africa.”

The NBA is in the process of planning another game in Paris next year, Silver said; he spoke Thursday just before a game between the Chicago Bulls and Detroit Pistons, with Wembanyama and his family sitting courtside.

Silver and Macron also discussed plans for Paris 2024, including how the current schedule calls for preliminary games in Lille — about 140 miles north of Paris. That decision is not final, and has been the subject of some criticism given the high-profile status basketball has on the Olympic program.

“He assured us everything would be OK,” Silver said.

Other topics covered by Silver on Thursday included:

Even though Silver and National Basketball Players Association executive director Tamika Tremaglio were in Paris this week, talks between the league and the union continued in New York.

“Our colleagues are back in New York, negotiating as we speak,” Silver said. “They’ve been meeting all week, just going issue by issue and trying to work through those issues that separate us. I would say, though, that I think we start from a very strong foundation.”

The NBA and its players have until Feb. 8 if either side wants to opt out of the current collective bargaining agreement. That deadline has been pushed back once already from mid-December, and it would not be a surprise if it gets pushed back again.

“There’s a strong sense of partnership between the players and the league,” Silver said. “That doesn’t mean we don’t have disagreements.”

Among the issues that the NBA and the NBPA have been discussing in recent weeks is a return to letting players enter the draft straight out high school without waiting a year — that move is expected to be included in the next CBA — along with what the league considers an “upper spending limit” that would significantly tighten the rules on how much teams can spend each year on their roster.

With LeBron James now perhaps just a couple of weeks away from catching Kareem Abdul-Jabbar and becoming the NBA’s career scoring leader, Silver revealed some of the notions the league is considering to pay tribute to the accomplishment.

“There’s no doubt we will stop that game and make sure we record for history, the ball, the basket, the uniform,” Silver said. “We’ll stop and make sure that we’ve done our jobs as the archivists of the NBA. At the same time, there’s that balance that they will be playing against a team that will very much want to win that night and not be distracted. Most likely we will do something in the moment, but then we will plan a larger celebration.”

James is on pace to break the record in early February — and if he does, it’s likely that the bigger celebration Silver spoke of would come at the NBA’s All-Star weekend in Salt Lake City later that month.

The last time the NBA played in Paris before Thursday was January 2020 — just under two months before the league shut down because of the COVID-19 pandemic.

“I actually remember when we were here then, that January in 2020, we started to see people wearing masks. People knew something was coming,” Silver said. “No one was predicting at that time that the world was going to shut down and we’d go on to play in a bubble, etc. Our hope is, of course, that we’ve bookended that pandemic, and the worst is behind us. We hope it is.”