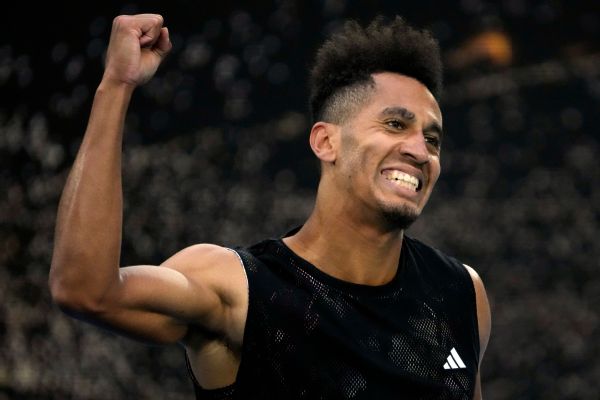 MELBOURNE, Australia — Just more than 48 hours ago, Michael Mmoh had his bags packed and was preparing to fly back to the United States. Now he’s set to pocket $156,775 after advancing to the third round of the Australian Open by upsetting No. 12 seed Alexander Zverev.

Dubbed a ‘lucky loser’ — someone who loses in qualifying but gets another chance in the main draw if someone else pulls out prior to their match — Mmoh had lost last week to Australia’s Aleksander Vukic in the final round of Australian Open qualifying. With no need to be in Melbourne any longer, he was planning his next move, and next tournament.

But just hours before the start of the tournament, he got some good news. David Goffin had pulled out of the main draw, and he was in, scheduled to face French qualifier Laurent Lokoli in the first round.

As he was walking off the court, Mmoh wrote on the camera lens, “Life is crazy”, and opened up in his post-match press conference about the events of the past few days; he said they didn’t “seem real” and he kept expecting to “finally wake up or something”.

“The past 48 hours has been a complete whirlwind from going from being ready to go back home, booking a flight, packing my bags. I was supposed to leave yesterday,” the world No. 107 said.

“Now I’m here, and I just had the best win of my career. It just doesn’t seem real. The two change of events is just insane.”

It’s not the first time Mmoh has been a luckier than usual loser. At an ATP event in Houston in 2022, Mmoh said he lost in the final round of qualifying but was granted a ‘lucky loser’ spot in place of current World No. 2 Casper Ruud. The kicker was that Ruud’s schedule included a first-round bye, meaning Mmoh was already one step — and paycheck — closer to the final.

“I played Sam Querrey, and I won that match,” he said. “That was another big momentum shifter for me last year. I think that got me the French Open wild card into main draw, and that was my first quarterfinal since 2018.

“So, yeah, I guess I’ve been pretty fortunate in the last 12 months, but I’m obviously capitalizing on the opportunities as well.

Mmoh will face fellow American J.J. Wolf for a spot in the last 16 on Saturday.