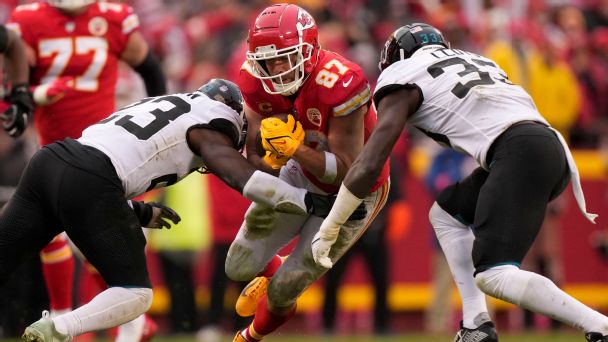 Henne, subbing for an injured Patrick Mahomes, led Kansas City on a 98-yard drive culminating in the second touchdown catch of the day for tight end Travis Kelce. The reception was Kelce’s 10th of the first half, and the ensuing point-after staked the Chiefs to a 17-7 lead.

The Chiefs took a 7-0 lead on Mahomes’ 8-yard touchdown pass to Kelce on their opening possession of the game. Kelce took a short pass from Mahomes and ran into the end zone. Kelce had four catches for 35 yards on the drive.

Mahomes to Kelce! @Chiefs start the scoring in KC

Kelce is the first player with 10 receptions and two receiving touchdowns in a half of a playoff game since the Seahawks’ Jermaine Kearse in the 2015 Divisional Round, per ESPN Stats & Info.