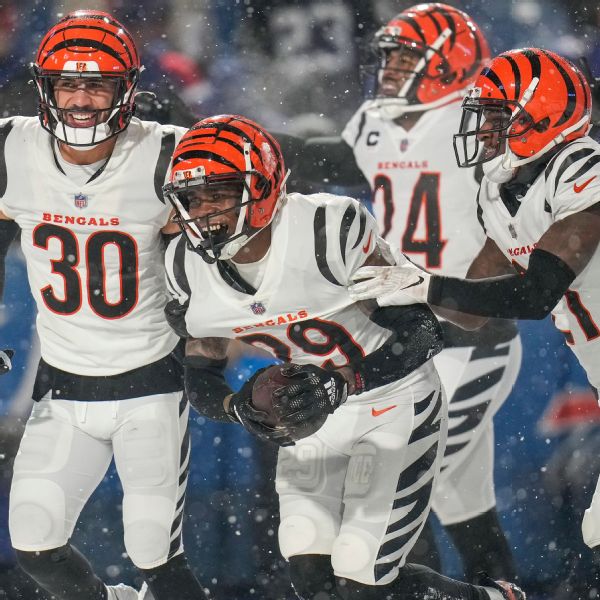 ORCHARD PARK, N.Y. — Anyone who had tickets for an AFC championship game in Atlanta might want to get their money back.

As the Cincinnati Bengals walked back up the tunnel in Highmark Stadium following Sunday’s 27-10 win over the Buffalo Bills in the divisional round of the playoffs, several players stressed that any of the 50,000 people who snagged pre-sale tickets for a game between the Bills and Kansas City Chiefs should seek a refund.

“There was not no stress about that at all, man,” Bengals wide receiver Ja’Marr Chase said. “Just proving people wrong, the NFL doing stuff like that for the Bills to go to the Super Bowl. They trying to make it seem like we’re not ready. So we just came in here and proved it. That’s all.”

Cincinnati, the defending AFC champions, are headed on the road to face the Kansas City Chiefs in the conference championship game for the second straight year. The Bengals secured their spot as one of the last four teams left in the playoffs with its most convincing postseason win in recent years.

Cincinnati opened the game with a 14-0 lead and maintained control throughout the game. The start was similar to the Week 17 game between the two teams, when the Bengals took a 7-3 lead in the first quarter and were driving down the field before Bills safety Damar Hamlin suffered a cardiac arrest. The game was eventually canceled, which led to the NFL creating a potential neutral-site game with Kansas City and Buffalo if both teams advanced to the AFC conference championship game.

But that first meeting gave Cincinnati confidence that it could thwart the league’s contingency plans.

The Bengals held the Bills to a season-low 10 points. That was Cincinnati’s second-fewest points allowed in franchise history.

Buffalo quarterback Josh Allen, who was briefly subbed out of a drive after a hit but did not leave the game, was 25-of-42 passing for 265 yards, no touchdowns and an interception on the Bills’ final drive of the game.

“I don’t think you ever look at the scoreboard and see the Bills having 10 points, even in the first half,” Bengals safety Jessie Bates III said. “This is what we do.”

Cincinnati was also bolstered by another strong offensive start. Dating back to Week 16 of the regular season, the Bengals have outscored opponents by a combined total of 39-0.

Cincinnati quarterback Joe Burrow played a major role in that. He completed his first nine passes of the game and finished the night by going 23-of-36 passing for 242 yards and two interceptions. He also broke Ken Anderson’s franchise record for most career postseason passing yards (1,321).

Bengals running back Joe Mixon tallied 20 carries for 105 yards, marking his highest yardage total in any of the team’s six postseason games over the last two seasons.

Burrow and Mixon’s numbers were indicative of how well the Bengals felt they played on Sunday despite Cincinnati having three reserves starting on its offensive line.

“It was just one of their best games of the year, rushing (and) pass-blocking,” Burrow said regarding the unit. “It might be our most complete game of the season as a team.”

The Bengals quarterback said the team didn’t use the pre-sale tickets for the potential Kansas City-Buffalo game as motivation. But Burrow referenced in it his postgame TV interview, telling CBS that the league “better send those refunds.”

Last season, the Bengals went on the road in the divisional round and knocked off the top-seeded Tennessee Titans. Bates, who said Sunday’s win was the biggest win over the last couple of seasons because it was the most recent one, pointed out the parallels between then and now.