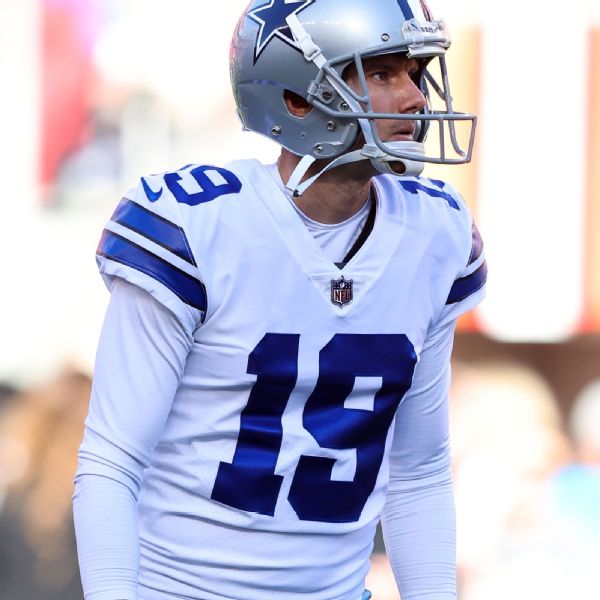 SANTA CLARA, Calif. — The Dallas Cowboys‘ decision to stick with Brett Maher as their kicker is already in question.

After Dak Prescott threw a 4-yard touchdown pass to tight end Dalton Schultz to give the Cowboys a 6-3 lead over the San Francisco 49ers with 9:25 left in the second quarter on Sunday, Maher’s extra point was blocked by Samson Ebukam. And if it hadn’t been blocked, it was likely to miss left.

In last weekend’s NFC wild-card win at the Tampa Bay Buccaneers, Maher missed four PAT attempts, the most in one game since 1932. He missed his only extra point try in the regular-season finale at the Washington Commanders.

Maher made his final PAT against the Buccaneers, but that good feeling — and the Cowboys’ decision to continue with him — was fleeting.

The Cowboys added kicker Tristan Vizcaino to the practice squad, but during the open portion of Thursday’s practice to the media, Vizcaino missed three of his five attempts, while Maher made all six of his tries. The Cowboys had hoped Maher’s misses were a one-time blip, although special teams coordinator John Fassel admitted Maher is battling a case of the yips.

Maher has missed eight extra points this season, including the playoffs. That’s the most by a kicker since 1981, when David Trout of the Pittsburgh Steelers missed eight. Only two kickers in the Super Bowl era have failed on nine extra points in a season: Tom Dempsey (1976) and Fred Cox (1974).

Before Sunday’s kickoff against the Niners, Maher’s pregame work was temporarily interrupted by several San Francisco players, including left tackle Trent Williams and backup quarterback Josh Johnson. That led to an exchange of words between Fassel, long-snapper Jake McQuaide, who is on injured reserve, and punter Bryan Anger, who is also the holder, and the Niners.

He made 14 of his 18 tries with Anger and snapper Matt Overton, and owner and general manager Jerry Jones briefly spoke to him as well.

Whatever Jones said, it was not enough to help Maher make his first PAT of the divisional round.

And later in the second quarter, with the Cowboys driving for a potential second score in a 6-6 game, they went for it on fourth-and-4, passing on a 52-yard field goal attempt. Prescott was later intercepted, ending that drive.

In the third quarter, after a San Francisco fumble set Dallas up for a score, Maher connected on a 25-yard field goal, capping a six-play, 14-yard drive that tied the game at 9-9.