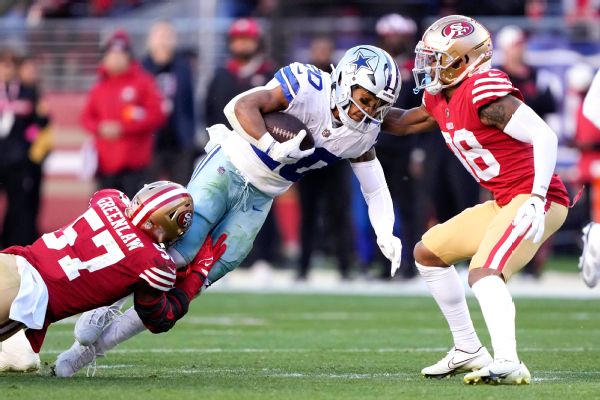 SANTA CLARA, Calif. — The Dallas Cowboys were without Pro Bowl running back Tony Pollard for much of their 19-12 divisional round loss to the San Francisco 49ers on Sunday.

Pollard suffered a left ankle injury with 1:24 left in the first half when he was rolled up after an 8-yard catch. Pollard needed help to the sideline and was wearing an Aircast on his left leg as he was carted to the X-ray room inside Levi’s Stadium. He was subsequently ruled out for the game.

Without Pollard, the Cowboys were left to rely on Ezekiel Elliott and rookie Malik Davis. Elliott had not averaged 4 yards per carry in the previous five games and averaged a career-low 3.8 yards per carry this season, playing a good portion of the year with a knee brace to protect a sprained medial collateral ligament. Davis had 161 yards and a touchdown on 38 carries in the regular season.

Elliott had 10 carries for 26 yards Sunday, while Davis did not have a carry.

Pollard’s injury could not have come at a worse time for the Cowboys or for him.

He is scheduled to be an unrestricted free agent in March and had the best season of his career. In 16 regular-season games, Pollard had 1,007 yards on 193 carries. He scored 12 touchdowns this season, surpassing the total he had in his first three seasons. He was named to the Pro Bowl for the first time in his career.

The Cowboys were banking on Pollard’s speed against a San Francisco run defense that finished second against the run (77.2 yards per game). Before getting injured, he had six carries for 22 yards and two catches for 11 yards.