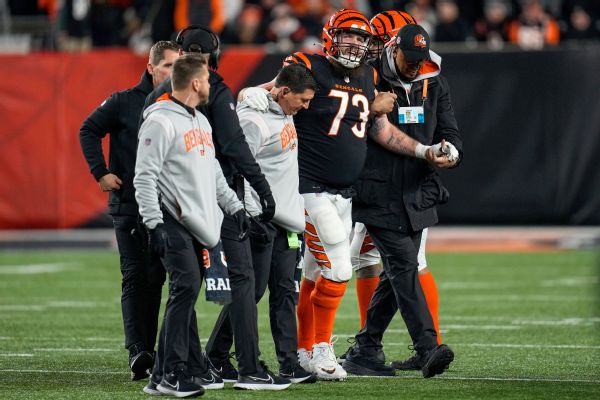 CINCINNATI — Two of the Cincinnati Bengals‘ top offensive linemen did not practice Wednesday as their status for the AFC Championship Game remains uncertain.

Right guard Alex Cappa and left tackle Jonah Williams continue to deal with lingering injuries; Cappa is recovering from a left ankle injury, while Williams has a dislocated kneecap.

Bengals coach Zac Taylor said both players are day-to-day and making progress. However, their outlook for Sunday’s AFC title contest against the Kansas City Chiefs is up in the air.

“You know, every day that passes makes it probably a little more difficult, but we’ll see,” Taylor said Wednesday.

The Bengals used three reserves in Cincinnati’s divisional playoff win over the Buffalo Bills. Jackson Carman replaced Williams, while Max Scharping took over for Cappa. Hakeem Adeniji has been at right tackle since Week 17, after La’el Collins went on injured reserve with a torn ACL.

The unit received ample praise following the 27-10 win against Buffalo. Cincinnati quarterback Joe Burrow was sacked just once in the victory.

“It was just one of their best games of the year, rushing, pass-blocking,” Burrow said after the game. “It might be our most complete game of the season as a team.”

Williams and Cappa were both spotted in the team’s locker room after practice. Cappa was observed without a protective boot on his left ankle for the first time since the injury occurred.

Cincinnati center Ted Karras said the team will need to replicate the practice it had on Wednesday amid wintry conditions inside Paycor Stadium.

“I thought we had high energy, good practice, good execution,” Karras said. “We’re going to need another two of them before we head out to Arrowhead.”

Karras represented some good news for the Bengals’ offensive line. After suffering a knee injury in the win against the Bills, Karras was a full participant at Wednesday’s practice.

Whoever plays for Cincinnati will have to contend with Kansas City defensive tackle Chris Jones, an Associated Press All-Pro selection who tied his career high with 15.5 sacks in 2022. Taylor said even though the Bengals have played Kansas City four times in the last 13 months, preparing for Jones doesn’t get any easier.

“You can tell how smart of a player he is,” Taylor said. “I’ve never met him, but you can just tell his style of play. He’s a very intelligent player. He’s a real challenge to go against.”

Nikola Jokic out for short-handed Nuggets at Milwaukee